about contact members
You are here: Home / Brain Health / Detoxification is Critical for Prevention and Treatment of Cancer 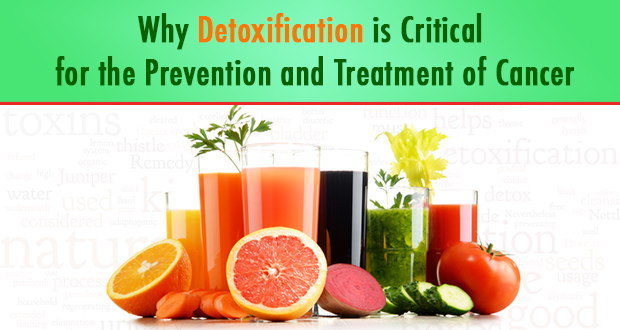 In our modern world we live amongst a sea of toxins in our air, water, food supply, and even in our homes. Hazardous chemicals are in household cleaning supplies and thousands of personal care products (including antiperspirant and mouthwash) with no label warnings whatsoever. Vaccinations often contain mercury, aluminum, formaldehyde, and other toxic substances. Prescription and over the counter drugs are in and of themselves toxic and often contain artificial chemical additives. Poisonous heavy metals from numerous environmental sources are yet another concern, and invisible electromagnetic fields are everywhere.

This bombardment of daily toxins from almost every place imaginable can have many adverse effects and take a toll on our health over time. Nearly all of these chemicals damage our cells, weaken the body, create chronic illness, and can even lead to cancer. And unfortunately, conventional cancer treatments such as chemotherapy flood the body with additional toxins that can keep it from healing.

With so much garbage coming into our bodies, it is important to be taking out the “cellular trash” on a regular and daily basis. This is what the cells of our bodies are designed to do through adequate sleep, movement, sweating, drinking enough clean water, and consuming high water content foods (i.e. fruits and vegetables), among other things. The cells of our body automatically cleanse and detoxify by eliminating accumulated waste products. If the body is unable to eliminate toxins fast enough, compared to the amount of toxic waste coming in, cells start malfunctioning and the disease process begins.

This is the underlying reason to detoxify. It is based on the principle that the accumulation of toxins greatly contributes to cellular damage and disease formation, and thus the elimination of toxins has the ability to prevent and even cure disease. Detoxification has been used for thousands of years (since the time of Hippocrates) and long before modern, pharmaceutical-based medicine became the accepted treatment for disease.

Water fasting, which rapidly detoxifies the body, is one of the oldest therapeutic practices used to cleanse and heal. The detoxification methods of ancient Ayurvedic medicine,3 a traditional healing system of India, have also been used for centuries. Detoxification protocols are also widely used amongst alternative medical practitioners.

Even though the U.S. Centers for Disease Control estimates that over 80 percent of disease has lifestyle and environmental causes, modern medicine basically ignores toxins as damaging and does little if anything to address the underlying causes of disease. Instead, the medical establishment relies on prescription and over the counter drugs as its treatment of choice.

Cell Renewal is a Must to Stay Healthy and Cancer Free

All life is maintained through the reproduction of cells in that cells are continually replaced when old cells die off. In other words, the body is in a constant state of self-renewal. Toxins are eliminated continually and consistently in a healthy body, which allows genuine healing to occur. As mentioned, the problem occurs when the body is constantly inundated with a stream of toxic material, making it difficult to keep up with elimination and allowing toxins to accumulate.

A 2005 study found 287 industrial chemicals in the umbilical cords of newborns.3Over half of these chemicals are known to cause cancer. This slow poisoning has an effect on the body’s pH balance and all these poisons push the body into an acidic state, allowing cancer to thrive. Toxins and heavy metals must be removed in order to modify the body’s pH and bring it back to an alkaline state.

Should You Detoxify During Chemotherapy and Radiation?

Numerous alternative cancer doctors who specialize in non-toxic and nutritional approaches to treating cancer emphasize the importance of a detoxification program for their patients. As cancer cells dies off, it is important to excrete them.

When the body is healthy, it does an adequate job of eliminating toxins. However, when undergoing chemotherapy treatments, the body becomes overloaded with toxins. These toxins can cause fatigue, bloating, suppressed immunity, aching muscles, and many other negative side effects.

If surgery has been performed and lymph nodes removed, detoxification becomes even more difficult. This is because the lymph system that is involved in waste removal has been compromised. Toxic build up can worsen conditions such as lymphedema, making detoxification during chemo even more important. In addition, radiation damages cells and increases toxicity in the body so eliminating dead cancer cells is necessary for healing to occur.

It is next to impossible to avoid toxins in the every day world, so regular detoxification is paramount for maintaining good health. You need to exercise, sweat, sleep well, drink plenty of clean water, eat plenty of fruits and vegetables, and supplement with supportive, detoxification helpers such as milk thistle, N-acetyl-cysteine (NAC), chlorella, and other superfoods.6

If undergoing chemotherapy and/or radiation, detoxification is even more important to help the body rid itself of dead cancer cells and the toxic effects of these conventional treatments. It is critical to see a practitioner who understands detoxification as a way of helping the body heal, regenerate, and repair.