about contact members
You are here: Home / Health & Body / Detoxing and Avoiding Chemicals / What Happens to Your Body When You Eat Sugar?

Instead of eating whole foods — real foods — the contemporary American diet typically consists mostly of sugar, highly processed grains, and a montage of chemicals that are anything but food.

To some extent, this isn’t your fault. Added sugars hide in 74 percent of processed foods under more than 60 different names,1 and these foods are carefully created in a laboratory with one thing in mind… profits.

If food manufacturers can create a winning combo of ingredients that you crave and can’t stop eating, it means you’ll keep coming back for more. Create they do, and it’s not by accident.

Dr. Howard Moskowitz, a long-time food industry consultant, is known as “Dr. Bliss.” A Harvard-trained mathematician, Moskowitz tests people’s reactions and finds the “optimal” amount of sugar for a product.

Essentially, he helps them find the “Goldilocks” zone of sugar, unhealthy fat, and salt that gets you to overeat and buy another bag or box even though you know you shouldn’t. And he’s made the sugar industry billions.2

Meanwhile, food giant Kellogg’s spent $32 million in 2014 just to advertise Pop Tarts. If you’ve seen them in the grocery store recently, you may see such alluring tag lines as “Limited Edition” and “made with real nutmeg, cinnamon, and clove” (for its seasonal pumpkin pie flavor).3

The marketing cleverly gets you feeling nostalgic about your grandma’s pumpkin pie and, lest you miss out on this special seasonal treat, a box or two wind up in your cart. You might even rationalize it by focusing on the “real” spices it contains.

But the only thing “real” about a box of Pop Tarts, or virtually any other sugar-laden processed food on the market, is the fact that it will slowly but surely desecrate your health.

What Really Happens When You Eat Sugar?

The American Heart Association and the World Health Organization (WHO) recommend limiting your daily added sugar intake to nine teaspoons (38 grams) for men and six teaspoons (25 grams) for women.

I strongly recommend limiting your daily fructose intake to 25 grams or less from all sources, including natural sources such as fruit — regardless of whether you’re male or female. That equates to just over six teaspoons of total sugar a day.

The average American, however, consumes around 20 teaspoons of added sugar a day, which is more than three times my recommended amount.

There’s simply no doubt that this overconsumption of sugar is fueling the obesity and chronic disease epidemics we’re currently struggling with, includingtype 2 diabetes, heart disease, and Alzheimer’s. Take this sampling of sugar research:

They were slower, and their brains showed a decline in synaptic activity. Their brain cells had trouble signaling each other, disrupting the rats’ ability to think clearly and recall the route they’d learned six weeks earlier.

The 15-year-long study, which included data for 31,000 Americans, found those who consumed 25 percent or more of their daily calories as sugar were more than twice as likely to die from heart disease as those who got less than 10 percent of their calories from sugar.8

Rats exposed to sugar water demonstrate all the criteria necessary to diagnose addiction: binging, withdrawal, craving, and addiction transfer (or addiction to other substances as well).9

The infographic below, published by Prevention, shows how sugar also drives inflammation and affects virtually every aspect of your health, from your skin to your joints, your heart, and even your genitals.10 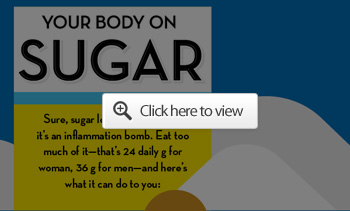 There’s no denying the fact that smoking cigarettes raises your risk of chronic disease, but this fact wasn’t always so widely accepted. And for decades, Big Tobacco sold the public on the opposite belief, even touting cigarettes as “physician tested and approved.”

Big Tobacco executives even lied during Congressional testimony, stating they had no knowledge of adverse health effects. Today, Big Sugar is being equally evasive about fessing up the truth, despite overwhelming evidence showing that excessive sugar consumption is a key driver of obesity, metabolic dysfunction, chronic disease, and dental cavities.

Earlier this year, a report in PLOS Medicine revealed, for instance, that the sugar industry knew as early as 1950 that sugar damaged teeth.11

They therefore adopted a strategy to deflect attention from this fact, and instead of encouraging reduced sugar consumption focused attention on how to reduce the harms of consuming sugar and downplay its health effects.

Andy Briscoe, the head of the Sugar Association, has even written to the scientific advisory committee making recommendations for the 2015 US dietary guidelines.

The committee recommended Americans consume no more than 10 percent of their daily calories in the form of added sugars, citing “strong and consistent evidence” that sugar is associated with obesity and other health risks.

Briscoe went so far as to say “there was no ‘proof of cause and effect’” linking ‘added sugars’ intake with serious disease,’ nor any ‘significant scientific agreement’ to justify telling the American public sugar is ‘a causal factor in a serious disease outcome.’”12

This pattern of denial, used heavily by Big Tobacco, continued from there. As The Washington Post reported, Briscoe also went on record with the following, quite ludicrous, statements:13

‘All-natural sugar is currently being scapegoated for all kinds of health problems, despite the fact that Americans consume less of it now,’ he wrote in the Pittsburgh Post-Gazette ‘Every major, comprehensive review of the total body of scientific literature continues to exonerate sugars intake as the causative factor in any lifestyle disease,’ he told the American Sugar Alliance.”

US Government Subsidizes the Wrong Foods…

Adding to the complexity of why Americans are eating more sugar than ever before are government agricultural subsidies. US nutrition guidelines recommend Americans fill their plates half full with fruits and vegetables. Yet, less than half a percent of agricultural subsidies went to growing such healthy foods. These “specialty crops” are grown on less than 5 percent of US cropland, while more than 50 percent goes to growing soybeans and corn, much of which is refined into sugar (or used to feed animals).14 The Atlantic reported:15

“‘If you go into a supermarket, you see that most of what’s lined up there is to sell sugar,’ [Yale neurobiology professor Gordon] Shepherd noted. Some of that we pay for directly, and some of it we pay for in taxes that subsidize its production.”

By subsidizing these, particularly corn and soy, the US government is actively supporting a diet that consists of these processed grains, namely high-fructose corn syrup (HFCS), soybean oil, and grain-fed cattle – all of which are now well-known contributors to obesity and chronic disease. The Farm Bill essentially creates a negative feedback loop that perpetuates the highly profitable but health-harming processed food diet that the United States has become infamous for.

The US government is actively promoting obesity and chronic disease through these subsidies, while simultaneously creating flawed and ineffective anti-obesity campaigns and programs to combat the very problems rooted in its agricultural policies. According to a 2011 report by the non-profit U.S. PIRG called “Apples to Twinkies,” each year, your tax dollars (in the form of agricultural subsidies) would allow you to buy 19 Twinkies but less than one-quarter of one red delicious apple!16

Watch What Happens When One Man Gives Up Sugar…

If you’re wondering what might happen to your health if you give up sugar, check out the video above. This man gave up sugar for one month, and while initially he was struck by cravings and irritability, after a week or so the cravings went away. He was awestruck when he finally woke up one morning and had no desire to eat something sweet. What’s more, his health measures, including weight and blood sugar, improved, as did his energy and fitness levels.

How to Kick Sugar to the Curb

If you currently eat sugar, there’s a good chance you’re struggling with sugar addiction. So I highly recommend trying an energy psychology technique called Turbo Tapping, which has helped many “soda addicts” kick their sweet habit, and it should work for any type of sweet craving you may have. Remember that in order to minimize your sugar intake, you need to avoid most processed foods, as most contain added sugar.

If you’re insulin/leptin resistant, have diabetes, high blood pressure, heart disease, or are overweight, you’d be wise to limit your total sugar/fructose intake to 15 grams per day until your insulin/leptin resistance has resolved. For all others, I recommend limiting your daily fructose consumption to 25 grams or less. Please refer to my free nutrition plan for a step-by-step guide to making positive changes in your diet. You simply cannot achieve optimal health on a diet of processed foods and sugar. A couple of other tricks to try to kick your sugar cravings: